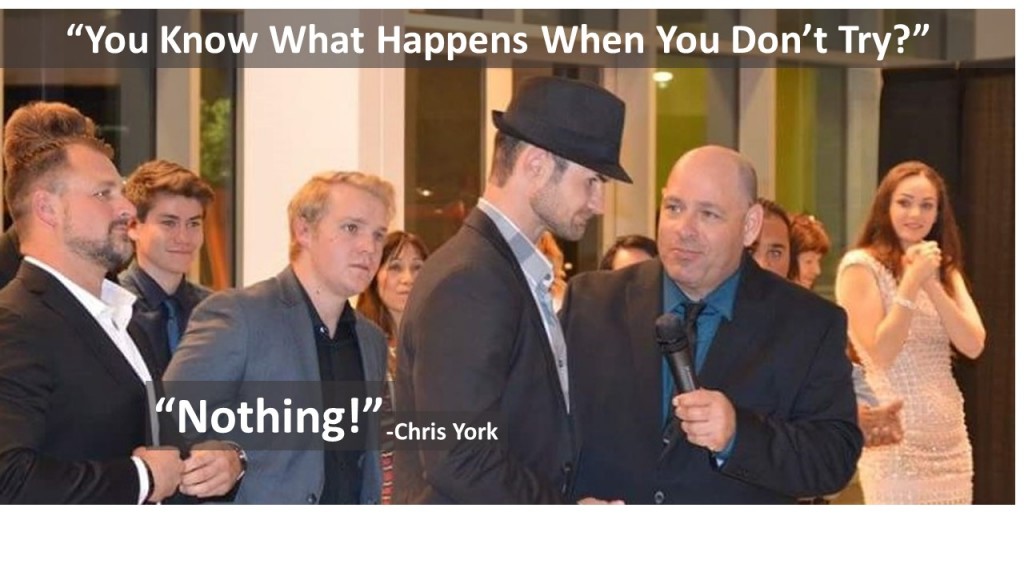 I was recently interviewed and the host of the show asked me what I thought of the word “try”. One of the single worst pieces of advice I have ever heard, and it is bandied about as gospel truth, is the phrase “do or do not, there is no try”. Personally. I do not look to fictional sci-fi characters represented by small wrinkled green Muppets for life advice.

We have three options when it comes to trying: TRY and succeed, TRY and fail or do not TRY at all. But if one follows this particular gem of advice, there are only two choices available: Do something and do it successfully or Do not do anything. Failure is not an option. Thus, people buying into this mantra tend to only attempt that at which they are virtually guaranteed to succeed, or at least have a high probability of success. Sadly, they fall into the trap of confusing not failing with succeeding – and there is a huge difference. Simply avoiding failure in no way means that a person is successful. In fact, avoidance of failure is more commonly known as doing nothing. Many have pointed to this piece of advice as justification for avoiding risk or to hide their fear of failure. While such advice may have been fine a long, long time ago, or in a galaxy far, far away, it is the motto of self-defeat and self-deception for far too many. Slogans like these may sound good in a motivational talk or look good on a motivational poster, but I prefer truth to great movie quotes.

History is replete with examples of people who succeeded only after repeatedly TRYING and failing. And those who became good at something they never would have even attempted if they were expected to only succeed at it on the first attempt. How many times did Thomas Edison TRY unsuccessfully to invent the light bulb? If his only options were to do and succeed or to do nothing at all, we would still be using whale oil, candles and kerosene for light. If Walt Disney had listened to this advice, he would have stopped drawing flowers with faces in grade school after being told that such drawings were not correct, and would have shuttered Disneyland immediately after the disaster that was opening day. Leonardo da Vinci is well known and wildly admired for his many drawings of flying machines, none of which have ever worked. But he continued to TRY new designs despite the fact that he never saw human flight come to fruition. I have never considered him to be a failure nor does anyone I know.

I encouraged my kids to TRY many things to determine what they might enjoy and be good at, or perhaps what they might choose to work toward becoming good at. One of my daughters tried basketball only to duck whenever the ball was passed to her and she detested both the practices and the games. But when she TRIED competitive cheer, she became the “flyer”, that is the person tossed up in the air and hopefully caught on the way down. She also lettered in swimming. Had she not TRIED many different activities she never would have known which activities were most enjoyable or where her abilities were. She also would have no trophies. On a personal note, my wildly diverse background and list of accomplishments proves that trying something can lead to success in areas that I never would have thought possible. It allowed me to build entire neighborhoods, high-rises, universities and houses of worship. It also allowed me to produce a television show, a radio show, comedy showcases and a series of fashion shows. And then there is designing a degree program, serving as Dean and teaching in universities and colleges.  None of these things were on my list of items I had planned to do. But opportunities presented themselves and I chose to TRY them. It took the decision to TRY first before any of it could happen.

When you TRY, only two outcomes are possible, but they differ slightly from the two options we discussed earlier. Option one: TRY and succeed, which is great. Wouldn’t it be nice if all our efforts had this outcome? And option two: TRY and fail, which is the next best thing to succeeding. Failure is the best teacher and leads us to success, even if not in that specific area. I have learned much more from my failures than from my successes, and I am willing to bet that you have had that exact same experience in your life. Notice that the other option discussed earlier is no longer an option – do nothing. TRYING is always better than doing nothing. Few regret that which they TRIED, even if it was not successful. Many regret that which they never even TRIED. What is it that you need to TRY? A different type of property to list and sell? A different method of generating leads? New and challenging skills to improve your ability to serve clients? Completing a formal education degree? Public speaking to improve your communication skills? What have you known down deep that you need to TRY but have avoided because you are unsure of your probability of success?

A friend, a former professional model and actor who had a contract with a major casual wear designer and had been cast as the lead in a pilot for a comic hero action series, got into a near death car accident about 15 months ago. This occurred about two weeks before shooting was to begin on the TV show. He knows first-hand the value of TRYING. He nearly died and was in a coma for some time following the accident. Upon waking, he was told by the medical experts that he would never walk, talk or be functional again. He decided to TRY anyway and slowly began recuperating and rehabilitating. His first effort was to teach himself to text with his left thumb so he could communicate to the outside world.  At each step he was told that while what he had accomplished was amazing, to not expect much more. Fortunately for him, he does not listen to those who tell him what he cannot do or should not TRY. He pushed through the repeated failures to stand, to walk, to talk, to manipulate things with his hands.  His consistent efforts began to pay off. Eight months after his accident he ran a 5K race. About 12 months after his accident, he ran a half marathon. And just this past weekend he completed a Spartan race. Yes, you read that right – a SPARTAN RACE 15 MONTHS AFTER NEARLY DYING! He is thriving today, although he still is challenged by ongoing health issues from the accident. When he came out to join our charity fashion show a few months back and walked the runway for the first time since his near death experience, I asked him how he had overcome such massive obstacles. He said to me, “You know what happens when you don’t try? Nothing!”

Yes, the truth is, the only thing that happens when you don’t TRY is nothing.